Welcome to a new travel dimension!
A mail with your username and password has just been sent to your e-mail address. If you did not receive our e-mail, please check your “junk” folder and/or contact us at: info@phoenixvoyages.com info@phoenixvoyages.com
Thank you for your question!
Our team will contact you within 24 hours.
Discoveries now
News
Share
Myanmar National Costume, Traditional Dress & Clothes

The wondrous ancient land of Myanmar is a must-see destination for those who crave an authentic travel experience. Abounding in ethnic heritage and natural beauty, expect to fall in love with its rich history and varied customs. In particular, their traditional costumes express the unique, cultural, and personal traits of the country. 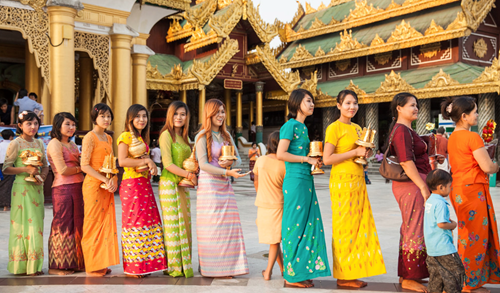 Burmese traditional costumes ideally symbolize the vibrant culture and warm hospitality of the nation. Their costumes are simple, reflecting its friendly people and lifestyle. It also features abundant diversity regarding textiles, weaves, colors, and materials, including velvet, silk, lace, and cotton.

The National Costume of Myanmar

The most widely recognized Burmese national costume is the longyi, an ankle-length wraparound skirt worn by males and females. The longyi was popularized during the British colonial period, replacing the traditional Paso worn by men and htamein worn by women in the pre-colonial era. 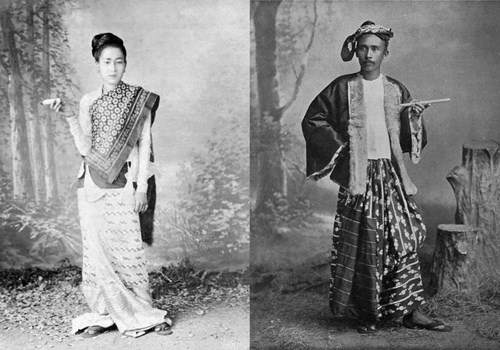 For men, the national costume is often ideally combined with a Taipon (a traditional Burmese shirt). When wearing this clothing, men tie it up around the waist. A longyi has no pockets so, to carry items, they need to put these things outside around the dress, at the waist’s position. Typically, men wear a longyi in dark colors. 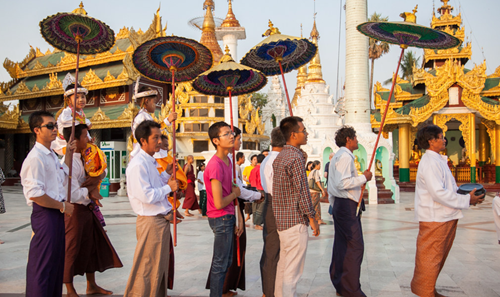 For women, the longyi, also called thummy, runs at waist level. The collar consists of multiple styles such as a round-neck, V-neck, and polo-neck. An Ahtet Hsin, a stripe of cotton, is attached to the top of the skirt to keep it in place. Women often wear a thummy in colorful and numerous patterns.

When do the Burmese Wear their National Costume? 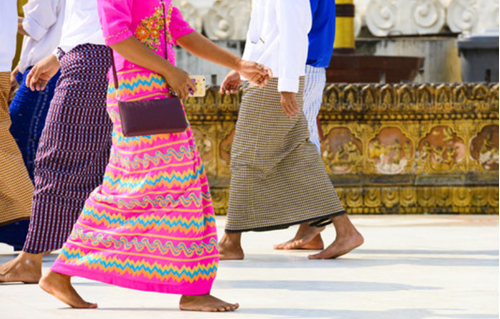 While people of other countries only wear traditional clothes on special occasions, Burmese people wear their national costumes daily. It is because these clothes are comfortable and suitable for the humid weather of the country.

It also becomes a multifunctional item in many cases. People pull up Longyis to form a raincoat or a “UV shirt” to protect themselves from the sun. Another use of the costume is that it can be enrolled to make a bag for Burmese women to carry food items.

Today, Burmese fashion has brought changes in longyis as they attached pins at the sides, front, and back. Also, they wear it even shorter than the original longyi nowadays. However, people still consider the old style as the best as it garners the best comfort. The fashions in Myanmar may come and go, but the longyi will remain a staple in their culture.