Welcome to a new travel dimension!
A mail with your username and password has just been sent to your e-mail address. If you did not receive our e-mail, please check your “junk” folder and/or contact us at: info@phoenixvoyages.com info@phoenixvoyages.com
Thank you for your question!
Our team will contact you within 24 hours.
Discoveries now
News
Share
The “B52 Cocktail” in Vietnam

The "B52", usually served in a shot made of coffee liqueur (Kahlúa), Baileys and Grand Marnier, is one of the most popular cocktails in Vietnam. An ideal beverage to accompany a dinner or dessert, it has become a must-have drink to immerse in the country's vibrant nightlife! 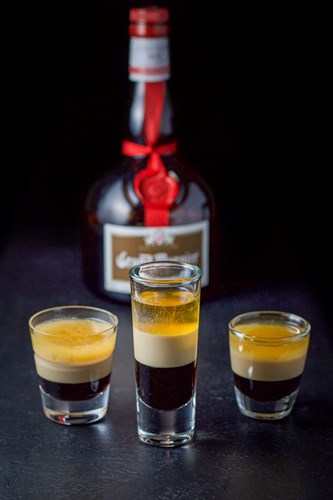 Named after the famous B-52 Flying Fortress aircraft used primarily during the Vietnam War, this cocktail gained popularity in the 1970s. Its most unique feature is that when prepared properly, the ingredients separate into three distinct and visible layers due to the different densities of the three liquors.

Its taste is a subtle blend of coffee, orange, cream and whiskey. It can also taste like butterscotch and coffee cream with a slight touch of sweet citrus. Although it is made with three liquors, the B-52 shot has a slight alcoholic flavor.

Over the years, bartenders have created several B52-style drinks by adding or substituting key ingredients. The most common variation is the "Flaming B52", which involves flaming the top layer of the shot. 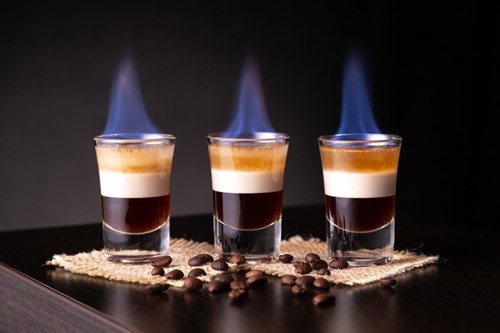 First, the bartenders pour the coffee liqueur into the glass. Next, the Irish cream liqueur is poured slowly over the back of a chilled bar spoon. Just as carefully, the Grand Marnier is poured on top, creating this three-layered cocktail.

The "B52", usually consumed neat, is served in a shot glass (small glass) or sherry glass (mini wine glass on a stem). However, a "Flaming B52" requires a heat resistant glass. For the latter variety of cocktail, the top layer is flamed, producing a blue flame. Sometimes, consumers add a dash of rum or other various alcohols.

Whether at a fancy dinner or in a bar, Vietnam’s dazzling nightlife has served “B52” as a highlight among many travelers. A staple beverage to partake during an evening out, this famous cocktail will surely elevate every visitor’s experience, but to be consumed in moderation.